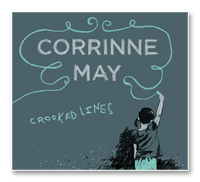 ‘Crooked Lines’ is the title of Corrinne May’s 5th and latest album, a title that came to her as she watched her daughter drawing with crayons one afternoon.

“She was drawing what seemed to me to be random, crooked lines all over the drawing paper, but she was telling me exactly what she was drawing- namely, a butterfly. And I thought to myself, perhaps
that’s how it is in life. Life is never a journey that goes in a straight line. Just like sailing, we reach our destination with ‘zig-zaggedness’, with crooked lines.”

“There is an ancient Portuguese proverb that says ‘God writes straight with crooked lines’ and I think it’s such a lovely saying,” says Corrinne, “because it expresses the faith that even if something seems like a ‘crooked line’ in our lives, God is able to use that for our good.”

“For truly, it’s the detours of our lives, the crooked, whimsical, circular paths we take that mould and fashion us. Oftentimes, it’s only in looking back at the path we’ve taken that we can truly appreciate why certain things had to happen in our lives, to bring us to our present circumstance.”

It’s been five years since the release of her last album ‘Beautiful Seed’ and in that time, Corrinne has indeed taken a detour from her usual comfort zone. She’s spent much of her last few years focused on being a mother to her almost 3 year old daughter Claire.

“Motherhood has been a surprising journey full of twists and turns and changes. Claire’s growing up so fast…I just don’t want to miss a single moment of this little person blossoming before my eyes.”

The album opens with a lullaby, “In My Arms”, the very first song that Corrinne wrote for the album.

“I spent a lot of time in the first few months of Claire’s life, just holding her and nursing her till the wee hours of the morning. And in the stillness of the night, the idea for this song came to me. It still brings me back to those moments, where the nights were sweet and long and filled with the scent of milk and the sound of Claire’s breathing while I held her in my arms and soothed her to sleep.”

Other songs on the 13-song album include “When I Close My Eyes”, a song inspired by an iPad app. Corrinne explains : “Claire has this iPad app where a little girl imagines doing these extraordinary things whenever she closes her eyes, things like reading her favourite book in space or being the fastest runner in the world. I figured I’d do my own version of what I’d love to see if I closed my eyes to dream.”

The song also features an unusual blend of music instrumentation.
“I heard, in my mind, a gospel choir singing back-up on the chorus and also had in mind the Irish whistle for the instrumental solo. It’s not everyday that these two elements get thrown into the same song, but I’m glad that it turned out just as I’d hoped.”

In a departure from her usual piano-based songs, the guitar figures more prominently on her latest album.

“I missed playing my guitar,” muses Corrinne, “so once I picked it up again, all these songs that had been waiting around in my head to be played started introducing themselves and begging to be written.”

“It helped that I had the support of an artist endorsement by Taylor Guitars. I love their guitars and just having a lovely guitar to play with helps inspire new songs!”


The result is an album of songs that is just a tad more boisterous, more playful, more rhythmically-driven than Corrinne’s previous work ‘Beautiful Seed’. The 13-song album also features Corrinne’s favourite musicians, some who have been playing with her since her days at Berklee College of Music in Boston.


“Eric Holden and Craig Macintyre laid down the bass and drum tracks for the songs in an epic 13 hour recording session! They were such troopers.”

Corrinne was also thrilled to have Erig Rigler, who recorded the beautiful instrumental solos on the soundtracks to the movies ‘Titanic’ and ‘Braveheart’, play the Irish Whistle on two songs in the album.

“I’m really proud of the work we put in to make this album.” says Corrinne. “It took some time to put together, but it’s all been worth it.”